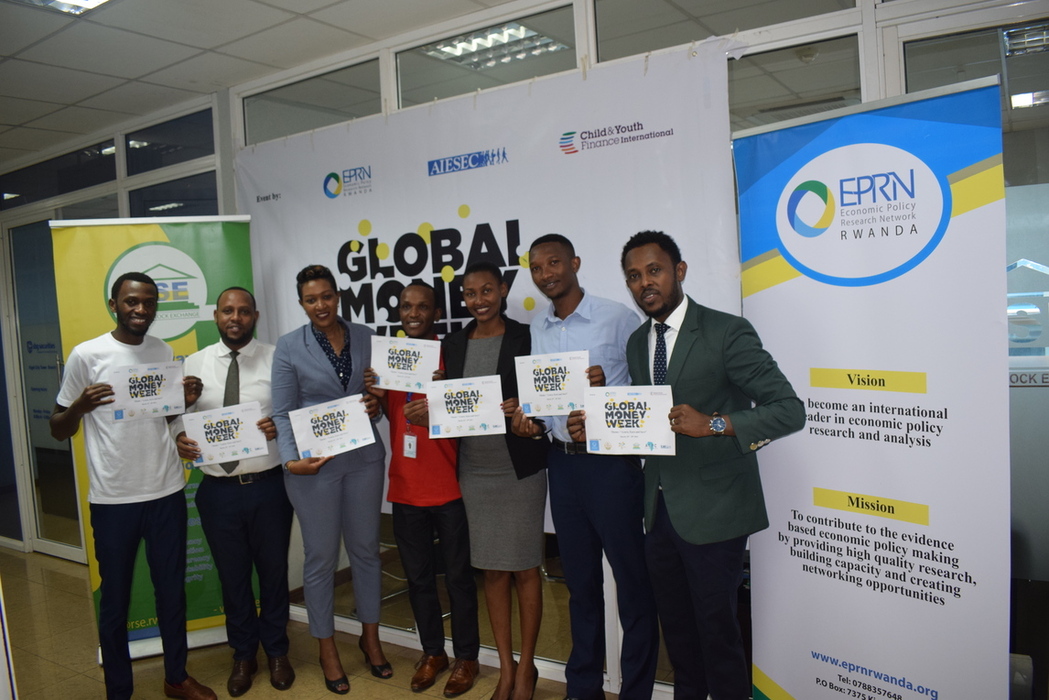 Global Money week, a child youth finance international initiative, is an annual financial awareness campaign built to inspire children and young people to learn about money matters, livelihoods and entrepreneurship with theme of LEARN.EARN.SAVE. This event was conducted in Rwanda by EPRN Rwanda in partnership with AEISEC Rwanda and it directly reached approximately 3,000 students from both secondary schools and universities and indirectly reached approximately 200,000 people through media outlets like Televisions and engaged 400, 000 on social media like twitter.

The one week event celebrations kicked off at the Rwanda Stock exchange. We were joined by students from schools like Green Hills Academy and Universities like AUCA and University of Rwanda CBE campus. Students were educated about the way stock market works and they also got a chance to ask questions for clarity. The most attentive students were also rewarded with cash. Students were then taken to I&M bank where they visited different departments and learnt about activities that are done in each department.

On Wednesday, students from Groupe Scolaire EPA were educated about stock markets and Ejo Heza project, which stresses saving for the future. The big day came on Thursday where students for Green hills Academy, AUCA, and UR CBE visited the Rwanda Revenue Authority and were educated about the relevance of taxes to the economy of Rwanda, these students were later interviewed by RRA and also given a chance to ask questions regarding the session they had with facilitators form RRA.

Later on, students from Lycee De Kigali, AUCA, UR College of Business and Economics, UR College of science and technology and ESSA Nyarugunga visited National Bank of Rwanda and were educated about relevance of the central bank to the economy of Rwanda, activities carried in the central bank and were also given a chance to ask questions and they poured them in big numbers.

The event was resumed at the African Leadership University where students from the host university and other students from other universities took part in an engaging financial literacy summit. It consisted of a panel by CEO’s From the Rwanda stock Exchange.

The event would then have a closing event at UR College of business and Economics where we engaged students from both university and secondary schools in an information session sponsored by ICPAR, a National accounting institution to sensitize these students about the inevitability of taking accounting courses.